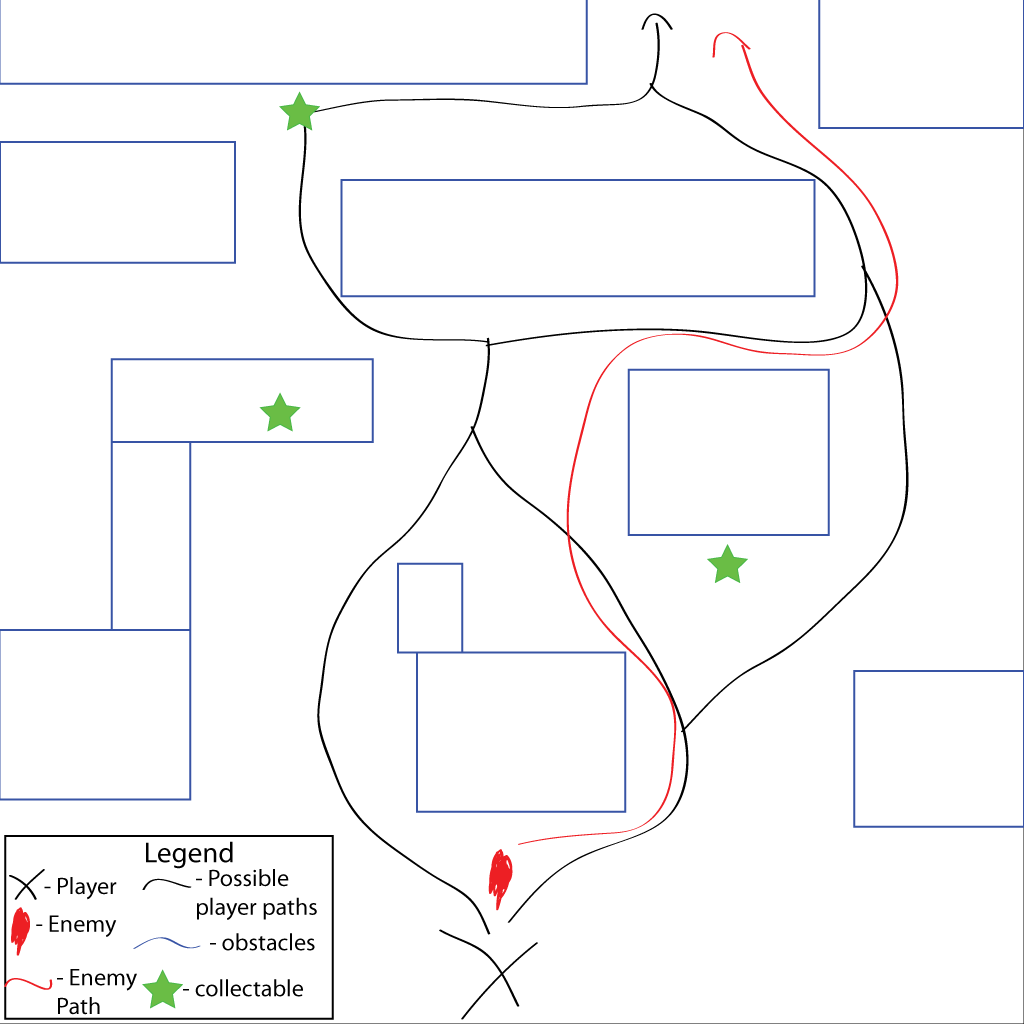 Overhead Map Design Points - Keep in mind this game is meant to be an Infinite Runner/FPS, therefore the player will always be moving forward as will the one enemy on the screen.
Multiple Paths - There are many paths the player can possibly take in this level, some paths are more beneficial than most with special collectibles that increases the players speed as they pick them up. The player could even jump over most obstacles in the level but for the sake of simplicity the players path only covers the ground, not taking jump into consideration.
​Local Fights - The level is constantly broken into smaller sections, with very specific points is where the player might meet up with the enemy, if they are not following the enemy the whole time. Each section has their own dangers and strategies that could be used to get around them.
Collision Points - With the goal of the game requiring the player to chase and catch this criminal enemy in red, there are meant to be many points where even if the player loses track or splits off from the enemy it's only a matter of time until they meet back up again for only a small window of time so it's the best the player takes advantage of these few points in the level.
Reference Points - The reference point on this map is so much present in the environment, but it's the enemy itself and even the collectibles present in it. If the player chooses to follow the criminal they can know a safe way to make it through the environment but also the collectibles would be hidden in such a way, should the player see then up ahead it could give the player a clue on how to maneuver through a route to get to them.
Defense Points - As this is an infinite runner the player is always moving, therefore always in danger at hitting obstacles. There are few points of defense in this level with one could be considered longer or more spacious areas to give the player some breathing time and try to expect what's coming next. Another defense point is the air, in the air the player is always safe, though jumping only takes so long and landing on top of an obstacle could results in a game over, the player is safe while jumping when used correctly.

Game Title
Italian Police - First Person Experience
Game Genre
Infinite Runner, First Person Shooter (FPS)
Overview: The Basics of the Game
The basics of the game are as follows: The player is always running forward. There are three "lanes" that the player can move in, a left, right, and center lane. The player can shoot obstacles away or avoid them by switching into another lane. If the player is touched the game is over. The player is chasing a criminal the whole time, when the player catches the criminal they win the game.
Player Rules
Some of the rules that make up the game. The player is always moving, they cannot stop or move any direction other than forward, unless they switch lanes by moving left or right but even then they are still moving forward. The player will die when colliding with obstacles, and the player succeeds upon catching the criminal NPC.
Gameplay Mode
SinglePlayer
Setting
Modern day, an Italian city/scenery
Challenges
Challenges for the player will managing the three lanes, making sure they always in a safe lane at all times or able to avoid/destroy obstacles that are coming in, all while chasing and trying to catch the NPC.
Core Features in the Game
The core features of the game includes: Chasing, in this game part of being an infinite runner is making it to the very end. In this game you have to chase down and catch a running criminal before they make it to the end, so rather than it being a test of survival on top of that it's a test of speed to get to the criminal before they get away.
Game Mechanics
Shooting and Evading are the two main mechanics of the game. Evading allows you to get past obstacles, either by sliding underneath or simply switching lanes to avoid them and it gives the player a small speed boost, a reward for successfully evading to allow the player to catch up to the criminal. Shooting can allow the player to destroy most obstacles, but it doesn't give you a speed boost, if you only shoot away obstacles odds are you will not be fast enough to catch the criminal.
Lives, Ammo, Money, Health points, etc.
The player will have only one life, once they die they will go back to the main menu and can choose to play again. Currently there are no plans to give the player a limited amount of shots. There may be coins you can collect in the level, that may put the player on a path and help them complete the level but the use of these coins is still to be determined. The player will only have one hit to take, then they are dead, though adding more hits is not out of the question.
Game Balance
So there's a risk/reward system at play here in this game. Shooting at obstacles is a very safe way to get through the level, but you won't gain any speed boosts to actually beat the level. Evading obstacles gives you the speed boosts you need but you put yourself at risk for dying and losing at the level. Shooting away an obstacle or two could be a very wise decision given some combinations you might encounter but every now and then you should take risks otherwise you will not win.
Victory Conditions
To win the game, the player must catch the criminal that is running ahead of them through the level. The losing conditions are: the player running into obstacles present in the level which causes death, failing to catch the criminal and having them reach the end of the end of the level.

What genre is the game?
​Police, comedy.

What type of game will this be?
Platform game, infinite runner.